Final Report: FEMA P-695, Quantification of Building Seismic Performance
Factors, bound and on CD-ROM, available through the ATC Online Store and
through FEMA.

Awards: The final report of this project, FEMA P-695, was awarded the 2010
Engineering Excellence Honor Award by the American Council of Engineering
Companies California.

Related Projects and Reports: The ATC-63-1 Project has developed
a modified and simplified version of the Methodology developed under the
ATC-63 Project for use with individual building components.

The ATC-63 Project was initiated by FEMA in response to an urgent need expressed by the International Code Council Evaluation Service (ICC-ES), the Building Seismic Safety Council (BSSC) Provisions Update Committee, and others needing to quantitatively evaluate the seismic performance capabilities of new systems that were being proposed for inclusion in model building codes and standards.


Seismic performance factors, including the response modification coefficient (R factor), the system overstrength factor (Ω0), and deflection amplification factor (Cd), are used to estimate strength and deformation demands on seismic-force-resisting systems that are designed using linear methods of analysis, but are responding in the nonlinear range.  Their values have become fundamentally critical in the specification of design seismic loading.
Response modification coefficients were initially introduced in 1978 in the ATC 3-06 report, Tentative Provisions for the Development of Seismic Regulations for Buildings.  In 1988 they were incorporated in the NEHRP Recommended Provisions for the Development of Seismic Regulations for New Buildings, and were adopted into the 1988 Uniform Building Code.  Since their initial adoption, R factors have been based largely on judgment and on qualitative comparisons with seismic-force-resisting systems in use at the time.


As new systems have continued to be introduced during each code update cycle, uncertainty in the seismic performance capability of our new building stock has continued to grow, and the need to quantify the seismic performance delivered by current seismic design regulations has become more urgent.  Advances in performance-based seismic design technologies, and availability of experimental data on cyclic response of structural components, have resulted in a new capability to use nonlinear collapse simulation techniques to evaluate seismic-force-resisting system behavior on a probabilistic basis.  This new capability has resulted in the publication of the FEMA P-695 report, Quantification of Building Seismic Performance Factors.


Scope of Methodology: The purpose of the methodology is to provide a rational basis for determining building system performance and response parameters that, when properly implemented in the seismic design process, will result in equivalent safety against collapse in an earthquake, comparable to the inherent safety against collapse intended by current seismic codes, for buildings with different seismic-force-resisting systems.  It is intended to apply broadly to all buildings, recognizing that this objective may not be fully achieved for certain seismic environments and building configurations.  In the development of the methodology, certain simplifying assumptions deemed appropriate for reliable and practical evaluation of seismic performance have been incorporated.


Process: The steps comprising the methodology are shown in Figure 1.  These steps outline a process for developing system design information with enough detail and specificity to identify the permissible range of application for the proposed system, adequately simulate nonlinear response, and reliably assess the collapse risk over the proposed range of applications.  Each step is linked to a corresponding chapter in the report, and briefly described below. 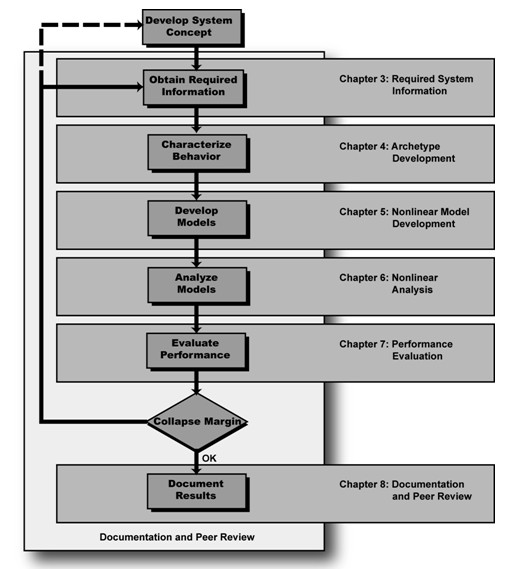 System behavior is characterized through the use of structural system archetypes.  Establishment of archetypes begins with identifying the range of features and behavioral characteristic that describe the bounds of the proposed seismic-force-resisting system.  Structural system archetypes provide the basis for preparing a finite number of index archetype models that provide the most basic (generic) idealization of an archetypical configuration, while still capturing significant behavioral modes and key design features of the proposed seismic-force-resisting system.
Collapse assessment is performed using both nonlinear static (pushover) and nonlinear dynamic (response history) analysis procedures.  Nonlinear response is evaluated for a set of pre-defined ground motions that are used for collapse assessment of all systems.  The record sets include actual recorded motions from large-magnitude events in the Pacific Earthquake Engineering Research Center (PEER) Next-Generation Attenuation (NGA) database.  Utilizing the process illustrated in Figure 2, ground motions are systematically scaled to increasing earthquake intensities until median collapse is established, which is the ground motion intensity at which half of the records cause collapse of the index archetype model.

Figure 2 Notional illustration of analytical process that is repeated for each ground motion and each index archetype model to develop collapse fragility data.
Using collapse data obtained from dynamic analysis results, a collapse fragility is defined through a cumulative distribution function, which relates the ground motion intensity to the probability of collapse.  Figure 3 shows an example of a cumulative distribution plot obtained by fitting a lognormal distribution through the collapse data.  The ratio between the median collapse intensity and the intensity at MCE-level ground motions, designated the collapse margin ratio (CMR), is the fundamental concept underlying the methodology.  It essentially measures the factor of safety (margin) against collapse, providing a uniform and consistent way of measuring the performance intent of the code, and for comparing behaviors across very different structural systems. 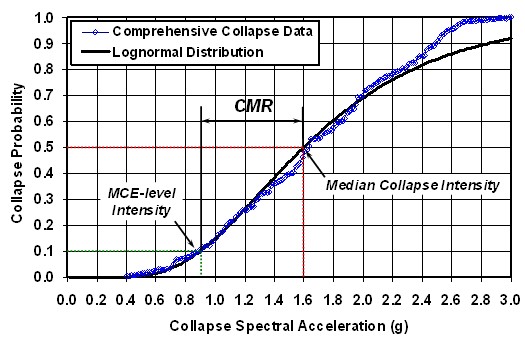 The response modification coefficient, R, is evaluated in terms of the acceptability of the calculated collapse margin ratio (CMR), shown in Figure 3.  Systems that have more robust design requirements, more comprehensive test data, and more detailed nonlinear analysis models, have less collapse uncertainty, and can achieve the same level of safety with smaller collapse margin ratios.
Implementation of the methodology involves much uncertainty, judgment and potential for variation.  The results of system development efforts must be thoroughly documented for review and approval by an independent peer review panel, review and approval by an authority having jurisdiction, and eventual use in design and construction.

The methodology contained in this report is a technical advancement that will, for the first time, allow quantitative assessment of the seismic performance of new systems proposed for inclusion in future seismic design codes and standards.